The 1st real snow of the year fell this week with a few inches coming down today. One of the benefits of the frozen precipitation was the arrival of the 1st Screech Owl to use the nest box in the back yard for 2012 . 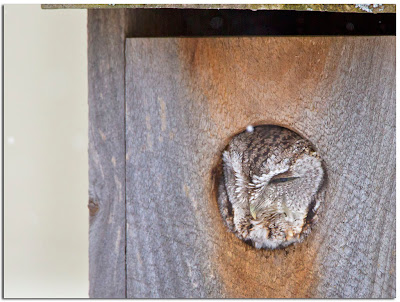 It sat in the hole for a brief time mid-afternoon only to be chased back into the box by several scolding Chickadee and Titmouse which can be heard in the brief video below.

It came back out a bit later and sat in the hole until leaving for the evening around 5pm. 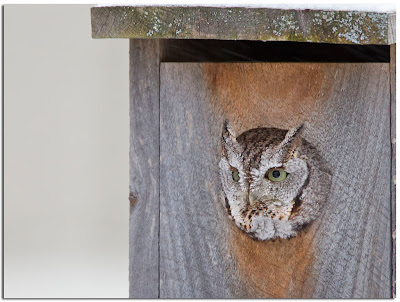 Another Cooper's Hawk sat long enough for several photos this morning. This one a young hawk, less than a year old. 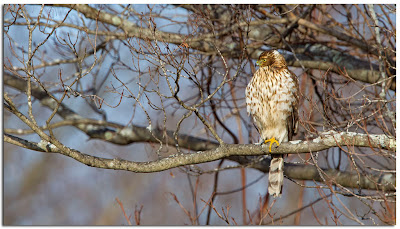 I use my Toyota Corolla as a portable blind when the conditions allow and today was no exception. The shot above was taken at a fair distance allowing the hawk a bit of time to get used to the car. I drove a bit closer for the next shot. 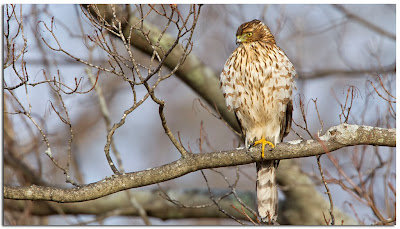 Or should I say, backed up a bit closer, as this was the best approach without spooking the hawk.

No the hawk isn't yodeling in the image below. This was just one of the many poses I saw prior to it regurgitating a pellet. 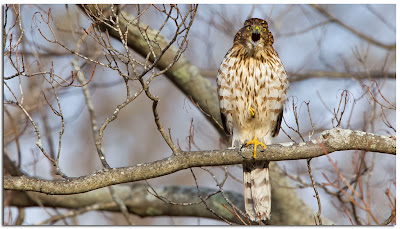 Just after dropping the pellet as it pulled itself back together and tucked it's foot back in. 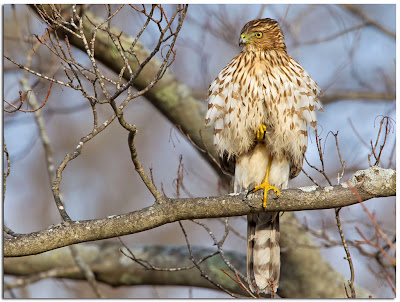 A look at it's eye in the image below and you can see the nictitating membrane or 2nd eyelid as it begins to pass over the eye. 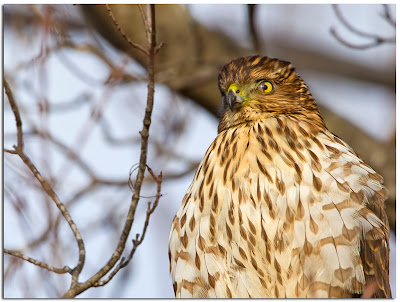 And one more look prior to my driving off, leaving the hawk where I found it. I love it when I can pull that off! 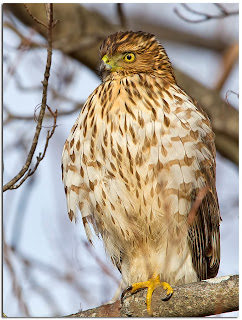 It's been a fairly quiet winter for most species of owls here on the North Shore of Massachusetts, other than a large influx of Snowy Owls which are always a treat to see. I've yet to catch up with one for any decent images with all I've seen to date either very distant or in poor light.

But today may mark a change in my luck with owls for 2012. A stop along Stackyard Road in Rowley found a Short-eared Owl actively hunting alongside the road well before dusk. Perched up below: 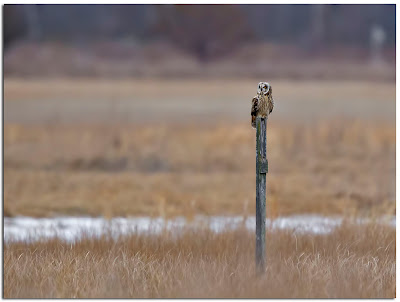 and just before pouncing on a vole. 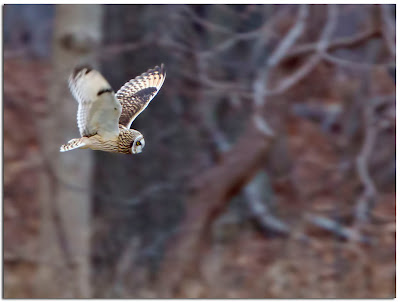 Both of the Short-eared Owl images were taken at quite a distance but I'm happy with them non the less!

It was bitter cold on Sunday with a high of 16 and the day starting out at 5 degrees, wind gusts topped out at 22 mph. Finding birds was a bit of a challenge but once located, like the Cooper's Hawk in the images below, they were cooperative subjects.

A large, adult female Cooper's Hawk sitting in a hedgerow along Rte 1A in Salisbury 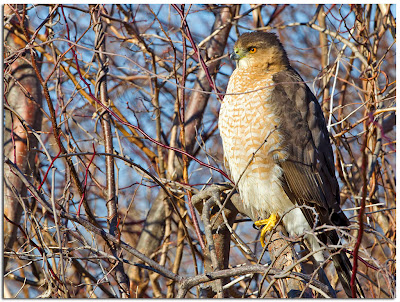 and a pair of head shots taken from inside the car as she kept an eye on the lens sticking out of the window. 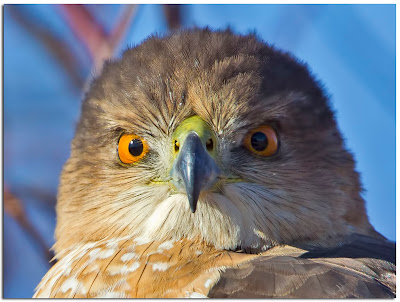 A truly beautiful hawk, most likely a 3rd year bird with the orange eyes that start out yellow and end up red as the bird ages. 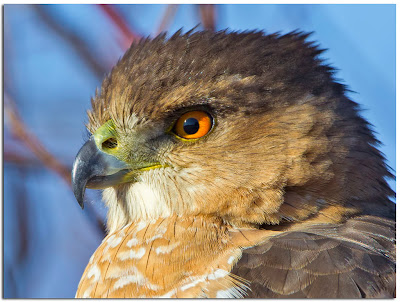 Earlier in the day, just after sunrise, did I say it was cold...:) the young Cooper's Hawk seen below had just made a run at the feeders in the backyard. Another try and no breakfast to show for it. 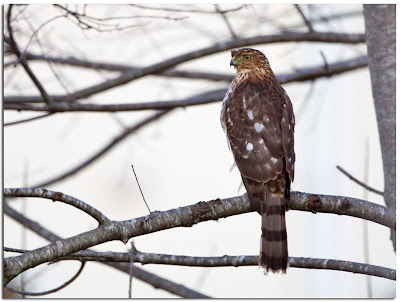 And lastly a stop in Seabrook, NH found an adult Glaucous Gull roosting in the parking lot along Rte 1A just before the Hampton bridge. A beautiful gull that we see infrequently in it's adult plumage. 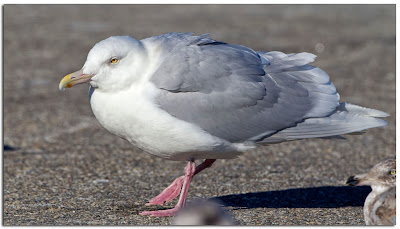 A stop in Rockport at Camborne Pond, a.k.a. Pebbly Beach off of Penzance Road found the Peregrine Falcon seen in the two images below sitting on a low telephone pole. 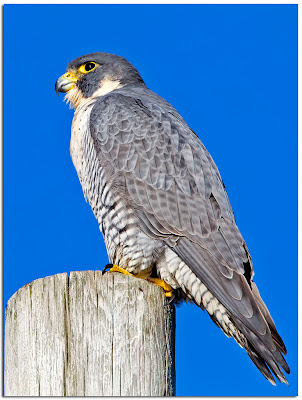 Once a jogger and several cars passed without spooking the falcon I moved a bit closer for these shots. A spectacular adult falcon, very large, un-banded and in great light! 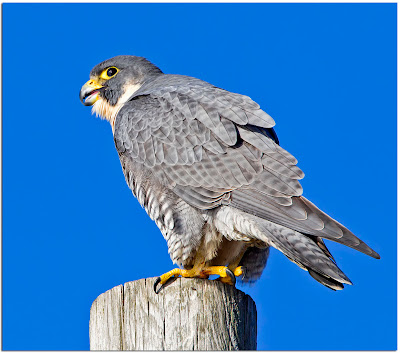 Perched on the weather vane atop the Gloucester City Hall this adult male Peregrine Falcon looks tiny. The early morning light added some nice color to the scene. 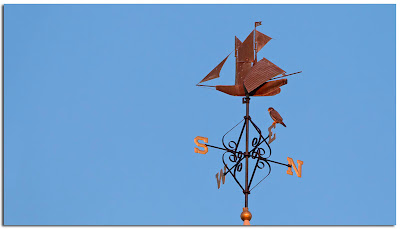 It's been an interesting few days, at least in the bird department, as we make our way through the 1st week of 2012. Mild temperatures greeted the 1st and 2nd with open water and lingering birds.

The Townsend's Warbler seen below (which should be in South America at this point in the year!) is coming to a feeder in Ipswich and made it through the recent cold snap. 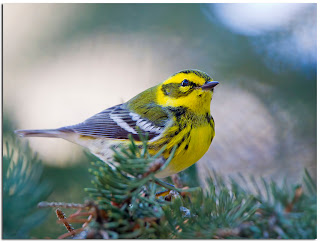 This is Clark Pond on Great Neck in Ipswich which was completely open on the 2nd and all but frozen over on the 3rd. Lots of American Coot, Gadwall and Mute Swans 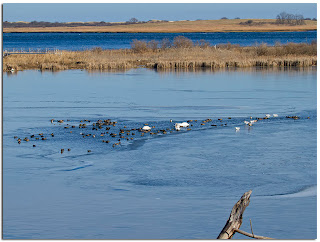 I was a bit surprised to see a Great Egret still hanging around the frozen edges of the pond. It is going to warm up for the next few days but I don't think we'll see ice free ponds anytime soon. 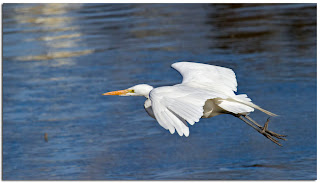 Cherry Hill Reservoir in West Newbury was also ice free on the 1st. Many Ruddy Ducks like the one below were still using the pond. The Barnacle Goose had been seen on the pond and the Cassin's Kingbird was still in the area as of the 3rd. 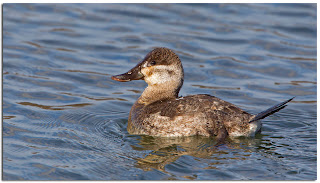 Camborne Pond in Rockport held a few dozen Mallards and the Northern Shoveler seen in the two images below on the 2nd. I'm certain the single digit temps the night of the 2nd and 3rd froze this little pond solid. 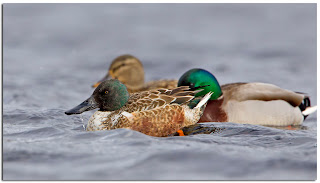 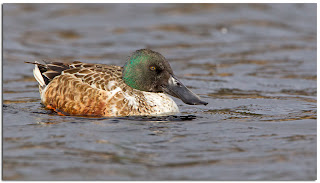 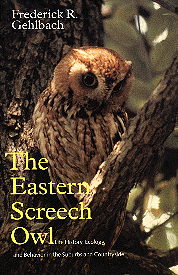